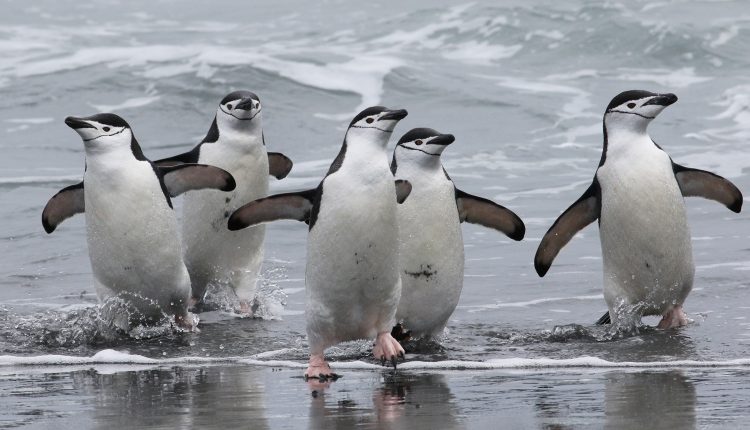 Just north of the Antarctic Peninsula, there’s a small, ice-covered island shaped like an elephant’s head. Each year, despite brutal winds and a landscape of crags, cliffs, and glaciers, hundreds of thousands ofchinstrap penguinsmanage to nest on these shores, creating a living sea of black-and-white feathers.

“They’re like little mountaineers,” saysNoah Strycker, an ornithologist and graduate student at New York’s Stony Brook University. “They climb up 300 to 400 feet in some places.”

But when Strycker and his fellow scientists spent 11 days counting chinstrap nests as part of a scientific survey this January, they discovered tens of thousands of penguins were missing.

“Comparing it to the number from 50 years ago, we’ve found a 56 percent drop in chinstrap penguin nests, which is rather shocking,” says Strycker.

Due to its remote location and challenging conditions, the last census of the chinstrap penguins of Elephant Island was taken in 1971, and that survey identified 123,000 nests. Strycker and his team found less than half of that number.

While the recent expedition did not research the causes of such a precipitous drop, other researchers have found links toclimate change, says Strycker.

For instance, a 2016studyfound that over the past 40 years, tiny crustaceans calledkrillhave declined by up to 80 percent in someAntarcticseas, possibly as a result ofwarming water temperatures. Krill arethe foundation of the Antarctic food web: Chinstraps eat the shrimp-like creatures, as do small fish (which penguins also eat). (Read more about how climate change is affecting penguins.)

Though it’s a striking discovery, Strycker cautions the results are preliminary, and not yet published in a scientific journal. He adds that Elephant Island is still teeming with tens of thousands of these charismatic birds, and that the species is considered «of least concern» by the International Union for Conservation of Nature.

“Though,” he adds, “that may change depending on the results of this expedition.”

To conduct a chinstrap penguin census on Elephant Island, you first need a vessel that can withstand the vagaries of Antarctic seas. In his case, Strycker and colleagues were hosted by the Greenpeace shipTheEsperanza. But because large ships can’t get near Elephant Island’s shores, the crew must pilot inflatable Zodiac boats to one of the crag’s few entry points that aren’t imposing cliff faces.

“We had to jump from the Zodiac and cling on to seaweed-covered, slick rocks, and then clamber up,” says Strycker.

Once ashore, the scientists would split up each morning and spend the day counting penguin nests one-by-one. “It sounds very basic, but what it takes is boots on the ground,” says Strycker.

Part of the reason why the expedition took place in January is because chinstrap chicks are usually about a month old, which makes counting active nests much easier. “In another few weeks, the chicks will start to get old enough that they’ll clump together in these big piles called ‘creches’,” says Strycker. “Then it gets a little trickier to census.”

Other scientists have also noticed a decline in the species.

P. Dee Boersma, a penguin expert and Wadsworth Endowed Chair in Conservation Science at the University of Washington, studies penguins in Antarctica and has visited Elephant Island once, as a naturalist on a tourist cruise. “And I was surprised to see how few chinstraps were there,” she says.

Boersma adds there could be another fallout of climate change at play: As Antarctica warms, rain becomes more common—and rain is a penguin chick killer. Once the young birds get wet, they often develop hypothermia and die, she says. (Learn how climate change is having surprising impacts in Antarctica.)

In fact, Boersma recorded a rainfall event on the Argentine coast that killed half of theMagellanic penguinchicks she had been studying.

However, until this new data is published, and more studies are carried out on chinstrap populations across the species’ range, Boersma cautions about extrapolating too much from this one survey.

“What it does say is that we need to be looking at these populations more carefully,” she says.

Penguins are “our sentinels for the oceans, and for the land, and when you see changes in their populations, people should pay attention.”