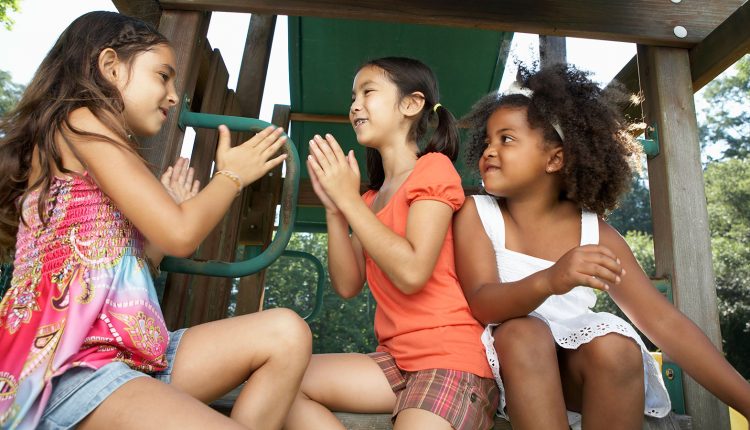 The collective gasp that happens when a small child chooses an encounter with a supermarket cashier or her new doctor as the moment to notice racial differences is one that many parents can relate to. Kids often ask questions that adults wouldn’t dare—and that’s a good thing.

“Children as young as three years old are aware of race and skin color, and they aren’t afraid to ask questions,” says Caryn Park, a professor at Antioch University in Seattle, whose research focuses on children’s understanding of race and ethnicity. “Their identities really matter to them, and racial identity is a significant part of their total identity. They also understand the power in talking about race and racism, and that when they bring those things up, they can get the attention of grown-ups and other children.”

Race is relatively simple to address when a young child notices skin color for the first time. Racism is understandably harder to talk about. Few parents would consider themselves or their children racist, with its connotations of intentional, angry, or mean behavior against different groups of people. But according toIbram X. Kendi, executive director of the Antiracist Research and Policy Center at American University in Washington, D.C., intention isn’t always part of racism.

What that means, Kendi says, is though most people don’t intend any harm, they’re still making judgments based on race. And according toMaggie Beneke, assistant professor of education at the University of Washington, often those judgments are learned from everyday interactions and social messages, resulting in implicit racial biases that we might not even realize we have but can still cause unintentional racist behavior. “For instance, after viewing children’s movies with mostly white princesses, a child might say something like, ‘I only like princesses who look like Elsa, and I don’t like Moana’s brown hair and skin,’” says Beneke, who studies equity in education.

The goal, Kendi says, is to raise children who are anti-racist. “As parents,” says Kendi, author of the upcomingAntiracist Babyboard book and co-author with Jason Reynolds of the young adult book,Stamped: Racism, Antiracism and You, “we should raise children who can express notions of racial equality, who can see racial disparities as a problem, and who can do their own small part to challenge this big problem of racism.” And that means recognizing racist ideas kids might have internalized—unintentionally or not—and steering them toward anti-racist behavior.

Developing empathy, compassion, and a sense of justice at an early age helps kids grow into anti-racist adults. For parents, that often means taking a deep breath and having those tough conversations about race and racism. “Regardless of how the conversation begins, parents should be sending the signal that it’s OK and important to talk about it,” Beneke says. Here’s what the experts had to say about raising an anti-racist child.

If your child says, “That lady is brown!” and she is, then just agree with her. «It’s not racist to notice someone’s race,» Park says. “An unwillingness to acknowledge her observation might send the wrong message to the child.”

What parentsdoneed to listen for are any value judgments kids might be unknowingly placing on those differences; adults can then use those comments as learning opportunities for their children. “Respond with open, non-judgmental questions to understand why your child might be making that assumption,” Beneke says. “Simple questions like ‘Why do you think that?’ or ‘What makes you say that?’ can help get the conversation started.” You can then explain what stereotypes are, and work with your child to think about examples that show how these stereotypes aren’t actually true.

Help your kids recognize the harm of a racist idea

If you hear your child expressing an idea about a group of people that they don’t realize is prejudiced, engage them in an age-appropriate conversation about it. For younger children, you might center the conversation around why the words are hurtful and how they might make someone feel. And though most older kids have been socialized not to make blatantly prejudiced comments, theycancrop up. Park encourages parents to help children examine both the statement’s intent and its unintended impact. “Consider this comment: ‘People of color can also be racist,’” Park says. “Ask the child if something happened to make them say that and what they were feeling. Listen supportively for hurt feelings of rejection or exclusion, and think about a plan to reconcile those feelings.» She adds that parents shouldn’t stop there, but instead continue discussing how bias toward entire groups of people hurts everyone.

Take a hard look at the books, movies, and TV shows your child is consuming, and you’ll likely notice a pattern about which groups are represented the most. Consider introducing your family to media that reboots notions around what a hero, neighbor, or friend might look like.

“We know that the majority of picture books centers around white characters, and that black and brown human characters are less represented than animals and other cartoon characters,” Beneke says. “But a lot of books out there feature black, brown, and indigenous characters, and these texts aren’t all about struggle.” It’s important, she adds, to expose children to a range of stories: characters experiencing joy as well as telling their own stories of resistance.

Look for books with illustrations and stories that celebrate diversity and expose your child to different perspectives. Find something great? Buy an extra copy and donate it to your school’s library.

Introduce diversity to different aspects of your life

In order for kids to embrace anti-racist ideals, they need to be exposed to people who are different from them. If their friend group looks a little too similar, it might be time to encourage a little diversity at those playdates.

It can also be an opportunity for parents to bring more diversity intotheireveryday lives as well.Manka Varghese, a University of Washington professor who specializes in multilingual education, suggests expanding your own social network to include race, gender, ability, and religion. This models anti-racist behavior to your children and provides an opportunity to talk about the value of differences. “You’re suggesting that different is good,” Park says. “It gives children access to a range of perspectives, foods, stories, and values.”

Of course, the goal isn’t to run out and make a friend simply because the person is a different race. Instead, examine what you might be doing unconsciously that limits who your family interacts with. “Think about where you as a parent or family are investing time and resources, including the school your child attends,” Beneke says.

To get started, look for activities that will expose your children to different perspectives. Consider trying out an extracurricular activity in a new-to-you neighborhood, or exploring beyond your normal weekend activities to allow relationships to develop naturally. Try attending Black History Month events at your local library, visiting museum exhibits that touch on race, or stopping in at cultural events at local community centers. Exposure can help broaden the idea of inclusiveness.

You don’t have to set up a time to have a “race talk.” Conversations can naturally occur if you’re paying attention to your child’s statements and staying aware of ways that unconscious bias can slip in.

For instance, if your child notices a commercial that lacks cultural diversity, chat with him about who the ad is targeting, and who’s been left out. If your tween is wondering why there aren’t any African Americans onFriends,engage with her on what might make the show more inclusive. “Encourage critical thinking and invite tweens into conversations about what they notice,” Park says. This conversation could lead to a «diversity audit» of the media you both consume to track people of color in leading, supportive, authority figure, hero, and villain roles. Then come back together to compare notes. Based on what you find, you might want to make changes to your media diet.

You can also look for ways that you as a parent can naturally call out disparities too. If your child points out that most professional basketball players are African American, it’s OK to also bring up that most of the team owners are white, and to ask what your child thinks that means. Varghese suggests engaging your child with questions like “What do you notice here? Why do you think that is? Who benefits from the situation? What can we do about it?” The answers can lead to fruitful discussions about privilege, race, and inequality—and help your child develop anti-racist ideals.

Don’t pretend to have all the answers

Above all, remember that there’s no one “right” way to have these conversations. Just like other important and uncomfortable talks, you might find yourself wishing you’d answered a question differently in retrospect. Own it.

“Talking about race takes practice, reflection, and action,” Beneke says. “Model that even though you’re a grown-up, you are still critically thinking about these ideas as an adult. Show children that these are hard conversations to have, but also important ones.”