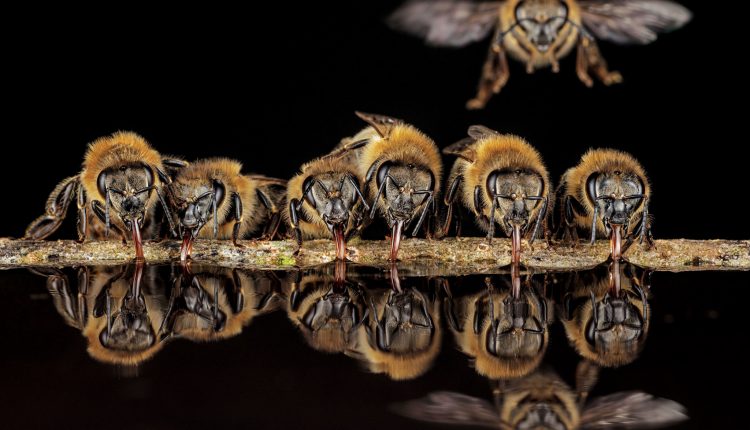 Almost as soon as the honeybee colony was installed, it came under attack.

Not from varroa mites, pesticides, colony collapse disorder, or any of themany other perilsnow facing honeybee populations across the world, but fromhornets—each one a red-eyed giant next to the hairy little bees. Each strike took just an instant, the predators snatching bees out of the air and then flying away with their victims, which would be carved up later and fed to the hornets’ own ravenous larvae.

One-on-one, a westernhoneybeeis no match for a European hornet. Up to an inch and a half long, the hornet is equipped with powerful mandibles capable of shearing smaller insects to pieces.

For those first few days of the siege, the honeybees appeared helpless in the face of the hornet onslaught.

“I thought, Oh God, if this keeps happening, they will kill my whole colony,” says photographer Ingo Arndt, whose yard in Langen, Germany, hosts the honeybees.

But as the week wore on, the bees began gaining ground. They started to swarm near the entrance of the nest, creating a living carpet of guards. Each time a hornet flew too close, some of the defenders would leap onto the invader and tackle it. In an instant, more honeybees would pile on and pin the hornet down.

Inside this bee ball, something even more bizarre was taking place. Western honeybees have a trick in which they can activate their flight muscles so rapidly that their thoraxes, or midsections, radiate small amounts of heat. When a dozen or more bees rev their engines at the same time, the cluster can significantly raise the ambient temperature.

The bees were cooking the hornets alive.

“I find this ingenious,” says Jürgen Tautz, a recently retired biologist who specialized in honeybees for about 25 years at theJulius Maximilian Universityof Würzburg, in Germany.

The heat trap is a powerful weapon, but it can also lead to friendly fire. Sometimes the innermost bees in the ball die alongside the hornet, sacrificing themselves for the colony’s defense.

This is just one facet of western honeybee behavior that Arndt has captured in new detail over the past two years. He has been photographing wildlife for 30 years, but he’s no insect expert, so he partnered with Tautz.

The bee-versus-hornet behavior has been documented in related species in Asia and has been seen by western honeybee keepers in Israel and Egypt, but no one had ever captured the insect duel quite as Arndt had. “It’s the best photo of it I’ve ever seen,” saysThomas D. Seeley, a Cornell University professorwho has been studying honeybee behavior and social interactions for half a century.

After the first few battles, Arndt says, he saw hornets and honeybees locked in combat as many as 10 times a day. If a honeybee colony is weak, hornets can annihilate it, but for now, the fight in Arndt’s yard continues as a war of insect attrition.

There are other factions in this saga as well. Arndt says honeybees from nearby colonies often raid the nest in his backyard in an attempt to steal its honey, especially toward the end of summer when flowers become less available.

After accompanyingscientists through the forests ofGermany’s Hainich National Parkas they studied bees in the wild, Arndt got hooked. But he realized that he’d never truly unlock the insects’ secrets while watching them in an artificial box engineered by humans for the purpose of extracting honey. What he really wanted was to photograph a natural nest.

This is no small feat. Even if you put on a beekeeping suit and climb 60 feet up into the forest canopy where bees like to nest, as Arndt did in 2018, “the most exciting stuff is happening inside the tree,” he says.

So in February 2019, Arndt received permission from the German forest authorities to go into a local forest and remove a fallen beech tree with an abandoned black woodpecker cavity in its trunk—a treasured home for western honeybees. He cut out a piece of the log and arranged for it to be sent to his garden.

Arndt set to work building a four-walled, plywood photographer’s blind up against the 200-pound hunk of wood, complete with lighting and a tiny window, which allowed him to sneak his macro lens through the back of the cavity. He then extracted the queen from a nearby colony of western honeybees and placed her inside the woodpecker burrow. All he had to do was wait in the blind with his finger on the shutter button.

Within moments, scout bees from the queen’s original colony lit on the rim of the woodpecker burrow. More bees landed and then more, until the log hummed with tens of thousands of the wild, social insects. The entire colony soon moved itself into the woodpecker cavity.

Over six months, Arndt shot more than 60,000 pictures, creating a portrait of wild honeybees unlike anything seen before.

“That is what makes this very special,” Seeley says. Ornithologists have used similar techniques to study birds, but no one studying bees in the wild had done this.

Hundreds of hours in the blind paid off. When it was warm out, Arndt watched as bees made repeated trips to a nearby water source that he provided, where they would suck up the liquid with strawlike tongues and then fly back to the nest. Inside, they passed the water to another group of bees, known as water spreaders, whose job is to regurgitate the liquid onto the combs, where it evaporates and creates a cooling effect. The process can be accelerated when other bees fan their wings to increase airflow to make the water evaporate faster. Called evaporative cooling, it’s essentially what happens when you sweat and then sit in front of a fan.

When the temperatures outside dipped, the honeybees grabbed hold of each other’s legs to form a living quilt along the surface of the combs. Tautz likens the structure to a sleeping bag, but one in which the fabric’s weave—made of interlocked bees—can be loosened or tightened to adjust the temperature.

In some cases,Arndt and Tautz were able to explain behaviors that beekeepers have long puzzled over. One mystery was why the insects would gnaw at the wood of their boxes without any appreciable effect. Inside the tree, they found, the behavior makes more sense.

“They scratch all the loose particles from inside the surface of the hollow,” Tautz says.

Not only might this behavior remove potential pathogens, such as fungal buildups, but it also creates a smooth surface onto which other bees can apply a shellac known as propolis.

“Propolis is a secretion produced by the buds of trees in spring,” Tautz says. “It’s very sticky, but bees collect it because it is antifungal and antibacterial. It’s part of the pharmacy of the forest.”

Other moments were captured for the first time, such as when Arndt photographed a honeybee opening a pheromone-emitting gland in midflight.

“Nobody has ever shown that before,” Seeley says. He hopes these intimate photos will open people’s eyes to the mostly hidden beauty of wild bees.

“We’re so used to seeing bees or thinking of bees living in a square white box,” Seeley says. “And that’s how they live for beekeepers. But it’s not how they lived for millions of years on their own.”