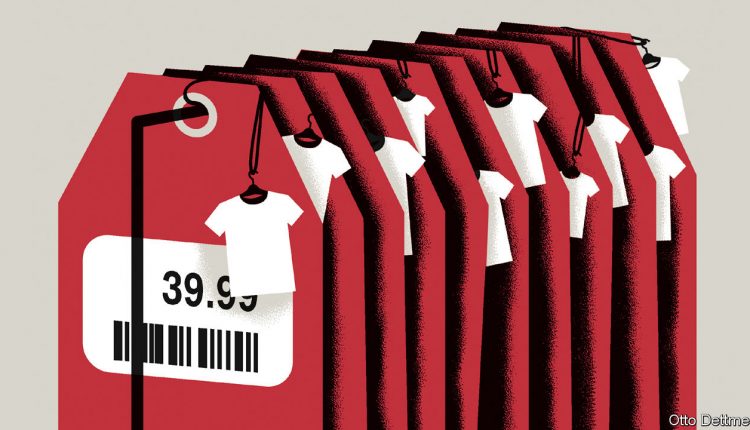 TWO YEARS ago British chocoholics felt the pinch from the decision to leave the European Union. As sterling tumbled, global firms selling to the British market faced the same production costs as before, but got less money for each sweet sold. Rather than raise the price per chocolate, some chose to shrink the chocolate per price. The famous peaks on a bar of Toblerone grew conspicuously less numerous (though Mondelez, the bar’s maker, said Brexit was not the cause). Other products suffered the same “shrinkflation”: toilet rolls and toothpaste tubes became smaller. The threat of Brexit made the phenomenon more visible, but it is surprisingly common. Statisticians and policymakers need to take note.

Every first-year economics student quickly becomes familiar with charts of supply and demand, which place price on one axis and quantity on the other. Given a drop in demand, the charts show, firms can either sell fewer items at the prevailing price or cut prices to prop up sales. But online retailing, which makes it easier to collect fine-grained price data, reveals how poorly textbook models reflect real-world market dynamics. The prices of consumer goods, it turns out, behave oddly.

A forthcoming paper by Diego Aparicio and Roberto Rigobon of the Massachusetts Institute of Technology helps make the point. Firms that sell thousands of different items do not offer them at thousands of different prices, but rather slot them into a dozen or two price points. Visit the website for H&M, a fashion retailer, and you will find a staggering array of items for £9.99: hats, scarves, jewellery, belts, bags, herringbone braces, satin neckties, patterned shirts for dogs and much more. Another vast collection of items cost £6.99, and another, £12.99. When sellers change an item’s price, they tend not to nudge it a little, but rather to re-slot it into one of the pre-existing price categories. The authors dub this phenomenon “quantum pricing” (quantum mechanics grew from the observation that the properties of subatomic particles do not vary along a continuum, but rather fall into discrete states).

Just as surprising as the quantum way in which prices adjust is how rarely they move at all. Retailers, Messrs Aparicio and Rigobon suggest, seem to design products to fit their preferred price points. Given a big enough shift in market conditions, such as an increase in labour costs, firms often redesign a product to fit the price rather than tweak the price. They may make a production process less labour-intensive—or shave a bit off a chocolate bar.

Central banks are starting to see the consequences. Inflation does not respond to economic conditions as much as it used to. (To take one example, deflation during the Great Recession was surprisingly mild and short-lived, and after nearly three years of unemployment below 5%, American inflation still trundles along below the Federal Reserve’s target rate of 2%.) In its recently published annual report the Bank for International Settlements, a club of central banks, mused that quantum pricing and related phenomena help account for such trends.

But firms’ aversion to increasing prices may be as much a consequence of limp inflation as a contributor to it. When the price of everything rises a lot year after year, as in the 1970s and 1980s, firms can easily adjust the real, inflation-adjusted cost of their wares without putting off shoppers. A 5.5% jump in the cost of a pint after years of 5% increases does not send beer drinkers searching for other pubs in the way that a 0.5% hike after years of no change might. Thus falling inflation can make prices “stickier”. To compensate, firms instead find other ways to impose costs on buyers—such as making products smaller or lower-quality.

But nimble firms have other options: the employment version of shaving a bit of chocolate from the bar. Some cut costs by boosting output per worker, often by driving workers harder. Tellingly, growth in output per worker now tends to fall in booms and rise during busts, precisely the opposite of the pattern 40 years ago, when inflation was high. Firms can respond to market pressures by reducing the benefits available to workers; Asda, a supermarket, recently announced plans to slash British workers’ holiday allowances. Or they can offer workers more tortuous schedules. Research published in 2017 suggests that being able to vary workers’ hours from week to week is worth at least 20% of their wages. On the flipside, during good times firms often opt to reward workers with office perks and one-off bonuses, rather than pay rises that cannot easily be clawed back during downturns.

The uncertainty principle
If it happens on a sufficiently large scale, the practice of tweaking quality in lieu of price could play havoc with essential economic data. Statistical agencies do their best to account for changing product quality, but if adjustments are unexpectedly common or subtle then muted inflation figures could easily be concealing a more turbulent economic picture. Central banks watching for big swings in inflation or wage growth as a sign of trouble could be reacting to figures that bear far less relation to business conditions than they used to.

What’s more, the substitution of quality for price as firms’ main way of responding to changing market conditions weakens the case for keeping inflation low and stable. Inflation makes relative prices less informative, economists reckon, making it harder to decide what to buy and how to spend. Rather than clarity, low inflation has brought a different sort of confusion: one of shrinking chocolate bars and lost holidays.