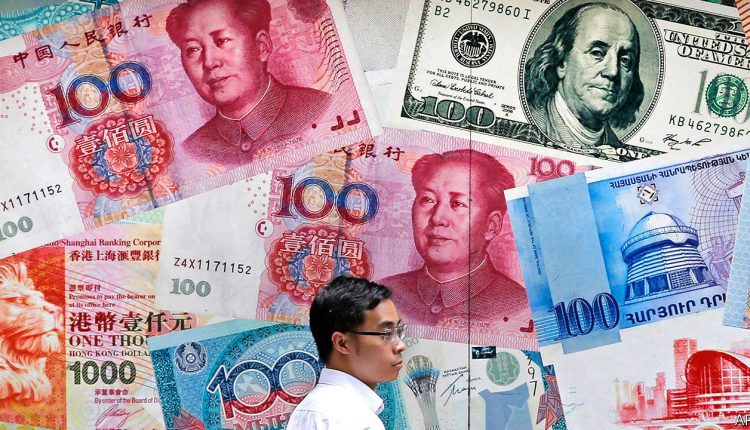 FREE EXCHANGE rates, argued Milton Friedman in the 1960s, would probably lead to “freer world trade…and a reduction of tariffs”. In China’s case his logic is being turned upside down. The imposition of tariffs is leading to a freer exchange rate. On August 1st President Donald Trump warned that he would soon impose a 10% levy on roughly $300bn-worth of Chinese goods that have not already been hit by the trade war. Four days later China responded by giving its exchange rate unaccustomed freedom to fall. The yuan weakened past seven to the dollar, an important psychological threshold, for the first time in over a decade. And stock prices in America duly fell, with the Dow Jones Industrial Average dropping 2%.

Since a messy exchange-rate reform in 2015, China’s authorities have said they will keep the yuan’s value broadly stable against a large basket of currencies, which now has 24 members, from the Thai baht to the Polish zloty. The combined weight of the dollar (and other currencies pegged to the dollar) in this basket is only about 30%. But that understates the dollar’s continued significance. Because most holders of China’s currency remain fixated on its value relative to the greenback, China’s authorities cannot afford to take their eyes off this benchmark either. Any conspicuous weakening of the yuan against its American counterpart makes people nervous, regardless of what is happening to the broader basket. And that nervousness can feed on itself, leading to further selling pressure.

The yuan’s strength against the dollar is also of special concern to Mr Trump and his officials. Odd as it may seem, the president is convinced that foreigners try to take advantage of America by undercharging it for their wares. His officials are therefore always on the lookout for signs that foreign governments are deliberately weakening their currencies to make their exports more competitive. China’s history of currency manipulation and its large trade surplus with America mean that the yuan is always under particular scrutiny.

For both reasons—to keep the White House mollified and yuan-holders calm—China’s authorities have previously resisted letting the yuan weaken past the big, round number seven. In the second half of 2018, for example, the country’s central bank supported the currency with both word and deed, emphasising the need for stability, buying the yuan offshore and increasing the regulatory cost of speculating against the currency.

Why change the approach now? In recent years China’s authorities have tightened controls on capital outflows, so they are less worried that a weaker yuan will prompt Chinese residents to dump their local assets in favour of foreign currencies. (The threshold is not like a “dam”, said China’s central bank, that once breached, will result in a flood.) And now that trade talks with America have broken down anyway, Beijing has little reason to prop up the yuan just to keep the White House happy.

A weaker Chinese currency is, after all, a natural market response to America’s tariffs. The new trade tax will harm Chinese exporters’ earnings, which will in turn reduce the quantity of yuan they can buy with their repatriated dollars. That would put downward pressure on the yuan’s price even if it were an unmanaged, floating currency. Indeed, China’s central bank was quick to blame “trade protectionism” and “unilateralism” for the currency’s decline.

In response, the White House will no doubt accuse Beijing of whetting its currency as a weapon in the trade war. But it would be more accurate to say that Beijing has stopped blunting its currency because it now sees little prospect of trade peace.