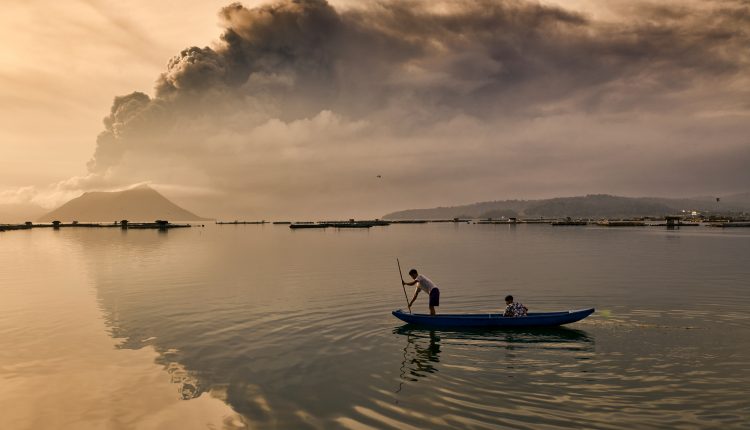 On January 12, the sudden and spectacular eruption of Taal Volcano in thePhilippinesshut down the country’s main international airport and canceled more than 500 flights. A plume of ash extended nine miles high; a thick layer carpeted the surrounding towns and villages, covering houses, roads, fields, and farm animals and forcing the evacuation of 30,000 people. Dust and debris from the country’s second-most active volcano—which last exploded in 1977—drifted as far north as the capital city ofManila, some 50 miles away.

Ninoy Aquino International Airport resumed partial operations the next day, and fully reopened January 14. However, airport officials continue to monitor the volcanic activity. While the eruptions from Taal have weakened since the initial event, an alert level 4 remains in effect, meaning another major particle-spewing blast could happen within hours or days. Travelers should seriously consider how their plans could be affected. Here’s how to make a decision on whether it’s the right time to head to the Philippines.

Due to the proximity of Taal Volcano to the Manila airport—where most international flights land—the continuing eruptions could result in another shutdown or the diversion of flights. Travelers can keep track of updates and airline advisories on the Ninoy Aquino Airport’sFacebook page.

Located on Taal Lake on the island of Luzon, the picturesque volcano and its surrounding shores have long been popular with tourists. Visitors hike or ride horses up the volcano rim to peer into its crater; Taal Lake lures boaters and bathers, and its shores and slopes hold amusement parks, picnic groves, and hotels with panoramic vistas. But these attractions are currently no-go zones due to the ongoing seismic dangers, with hundreds of volcanic earthquakes rumbling underground, causing fissures that are splitting roads and even houses in half. ThePhilippine Department of Tourismhas ordered all tourist enterprises to close in the affected area. Even as Filipinos await another potential mega cloud of ash, cleanup and emergency aid to residents and evacuees are underway.

Which attractions have been affected?

The areas most affected are the towns and villages surrounding Taal Lake—and to a limited extent, Manila. Though changing volcanic conditions may affect Manila’s airport and limit access to the country for international visitors, Mactan-Cebu International Airport, in the central Philippines, is not affected.

Manila’s proximity poses some concern if you’re visiting the capital. Winds blowing from the volcano could bring more ash to the city, causing schools and offices to close again. A few days after the blast, the air had cleared and it was no longer necessary to wear a mask to keep from breathing ash. Still, N95 dust masks are currently in short supply in the Philippines, and travelers planning to spend time in Manila should consider bringing their own.

The Department of Tourism reiterates that the rest of the country remains safe and accessible. The Philippines is made up of over 7,000 islands, and tourist-friendly beaches and mountains in other destinations—including Palawan, Boracay, Bohol, and Siargao—are unaffected by the volcano.

What if there is another eruption?

Although predicting when or if another major eruption will occur is difficult, Philippine authorities are looking at seismological history to gauge the likelihood of a second, possibly more intense blast. In addition to the hazards from eruptions, authorities have warned of other dangers, including a volcanic tsunami that could further impact towns on the shores of Taal Lake.

What about future travel?

The Philippine Institute of Volcanology and Seismology (PHIVOLCS), the government institution that monitors volcanic activity and issues alerts on volcanic hazards, has placed Taal at a level 4 advisory (imminent eruption), just below level 5 (active eruption). It is difficult to predict how long the volcano will remain at a level 4. We recommend monitoring advisory levels on the PHIVOLCS website, on their officialTwitteraccount, and through trusted news sources.

How you can help

Several government agencies and private organizations are providing aid to evacuees, and many local groups and individuals from across the Philippines are donating cash to facilitate the recovery, rescue, and cleanup of the affected areas.

However, the International Federation of the Red Cross and Red Crescent stresses that donating clothing and goods from overseas doesmore harm than good. The Philippine Red Cross is providing services and emergency items to people in evacuation centers, including “deploying ambulances, giving out dust masks, providing hot meals, water, sanitation, and hygiene, and offering psychosocial support and child-friendly spaces.” The Philippine Red Cross has made an appeal for donations, which can be made viaPayPal.

Richard Gordon, chairman of the Philippine Red Cross, says the organization is planning for the worst and recognises that the full extent of the devastation is only now becoming clear. “We are racing against time,” he said. “More earthquakes are being recorded, and they’re getting stronger every day, which means the magma is mixing up with the steam that could lead to a catastrophic eruption.”

If you are already in the Philippines, the Philippine Red Cross welcomes volunteers at its logistics center. Up-to-date information on volunteering is available on itsFacebook page.

There have not been human casualties so far, but pets, livestock, and the horses on Taal Island and the surrounding areas have suffered or died due to the heavy ashfall. A local organization calledGuardians of the Furhas rescued pets that were left behind during the evacuation, andPETA Asia’s animal rescue team is on the ground to provide aid, veterinary services, and food.

Aurora Almendral is a journalist based in Southeast Asia. She covers disaster, climate change, politics, and business. Follow her on Twitter.